Announcement of Honorees for 2014 Exemplifications

The Master of the 4th degree SK John Winfrey is proud to announce the Honorees for the two District Exemplifications.

The Honoree for the Priest and Special Needs Exemplification on February 22, 2014 is SK Maurice Hunt FDD, PGK, PFN.

SK Maurice Hunt FDD, PGK, PFN Before passing this last year Maurice (Mo) served our Country, Our Order, and his community faithfully in many capacities for many years. In particular. Maurice served the Maryland State council as a District Deputy, Warden to the State Deputy and Maryland State Activity/Project Chairman. He also served the Archdiocese of Washington District as a District Marshal and as District Membership Director.

The Honoree for the March 29, 2014 Exemplification is SK Fr. Gregory Gresko.

Fr Gresko is a long time advocate for the Knights of Columbus. He currently serves as Washington DC Associate State Chaplain, as well as Chaplain of the Blessed John Paul II Shrine. Fr Gresko is a member and strong supporter of James Cardinal Hickey Assembly. 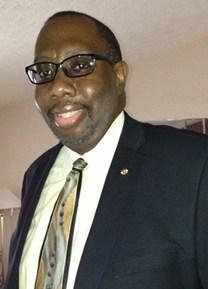 SK Maurice E. “Mo” Hunt FDD, PGK, PFN was born on March 9, 1963 in Camp Springs, Maryland. He graduated from Friendly High School, Fort Washington in 1981. Four years late he graduated with honors from Alabama A&M. Maurice worked as a finance officer at Andrews Air Force Base in the late 1980's. This job led him on to work as a contractor for the Federal Government and eventually to becoming a program analyst for the Federal Government at the Navy Yard. He also worked as a DJ. At one of his events as a DJ he met his future wife Lady Kendra whom he married in 2003.

Maurice joined the Knights of Columbus in 1999. He was active at many different levels of the order. In his council St. Mary of the Assumption #9302 he was elected Grand Knight in 2010. He also served the Maryland State Council for many years as a Warden to the State Deputy, District Deputy and as Maryland State Activity/Program Chairman. On the Fourth Degree side he was elected the Charter Faithful Navigator of Father John T. Dewan Assembly #3546 in 2007. His service to the Archdiocese of Washington District of the Fourth Degree included being an Assistant District Marshal and the District Program Director.. As District Marshal he was among those selected to represent the Order as Color Corps at the White House when Pope Benedict XVI visited in April 2008. In recent years he applied his DJ skills for the karaoke night on the night before the exemplification.

In June 2012 Maurice was diagnosed with cancer. After many months of treatment he entered a brief recovery phase that allowed him to return to work and even assist at the 2013 exemplification. Unfortunately things took a turn for the worse in mid 2013. Maurice Hunt died on September 30, 2013. 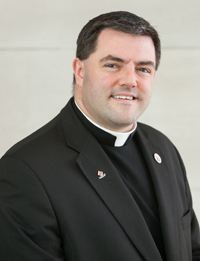 Fr. Gregory Gresko is Chaplain of the Blessed John Paul II Shrine, responsible for the spiritual care of the Shrine's staff and pilgrims. Born in Towson, Maryland, he grew up in Richmond, Virginia and studied at Saint Thomas Choir School in New York City, pursuing studies in piano in the conservatory preparatory programs of Manhattan School of Music and Mannes College of Music. Fr. Gresko earned his high-school diploma with honors from The Collegiate Schools in Richmond in 1988.

Fr. Gresko received his Bachelor of Science degree from the College of William and Mary with a double concentration in Psychology and English. He completed his Master of Arts in Education degree with a specialization in Secondary English Education.

After priestly ordination and during his continued studies in Rome, Fr. Gresko served as the Catholic priest on base at the United States Army Garrison (Camp Darby) in Livorno, Italy.

Upon return to the United States, Fr. Gresko served in the administration of the Benedictine Society of Virginia during which time he was a member of the Board of Trustees of now Benedictine College Preparatory School in Richmond, Virginia.

Fr. Gresko is a 4th-degree Knight of Columbus and has served as the Associate State Chaplain of the District of Columbia State Council since 2012. He is a member of Potomac Council #433 as well as James Cardinal Hickey Prince of the Church Assembly #2534.

Fr. Gresko has over twenty years of experience as a minister to students and young adults as a priest and musician, including through journeys abroad as a lay missionary in the Czech Republic, Poland, and Ukraine. He was a contributing founder of Cirkevní Gymnázium Plzeň, a Roman Catholic school (grades 5-12) in Pilsen, Czech Republic. During the late 1990s, Fr. Gresko was responsible for developing a new English literature curriculum at the XIV Liceum in Wrocław, Poland. He is fluent in French and Italian and enjoys the study of foreign languages, music, culinary arts, and swimming.

Fr. Gresko is the son of Joseph and Wanda Gresko of Montpelier, Virginia and has two younger brothers, Matt and Adam. He currently resides in Washington, D.C. His work on the theology of love has been featured by Inside the Vatican, Catholic News Agency, Catholic Online and BeliefNet (including his former blog called The Blogging Monk). Fr. Gresko has been interviewed by EWTN, Catholic News Agency, and VocationBoom! as well as numerous local news outlets.