The Story of Fr. Kapaun

Fr. Emil Kapaun, Pray for us.

To read more on the Life of Fr. Kapaun and other Catolic Patriots, please visit our Catholic Patriots section.

May 13th Good of the Order

May 13th is to put it mildly an “interesting” day for Catholics in general and my family in particular.

In 1917 Our Lady of Fátima first appeared to three children in Portugal.

In 1981 while Pope John Paul was entering Saint Peter’s Square he was shot at close range. In great pain, the Holy Father kept repeating, “Mary, my Mother! Mary, my Mother!” I remember the day well – it was my birthday! My wife also remembers it all too well, as she was in St. Peter’s Square that day and was a witness to history!

When he briefly gained consciousness before being operated on, the Pope instructed the doctors not to remove his Brown Scapular during the operation. He stated that Our Lady of Fátima helped keep him alive throughout his ordeal.

He said later: “Could I forget that the event in St. Peter's Square took place on the day and at the hour when the first appearance of the Mother of Christ to the poor little peasants has been remembered for over sixty years at Fátima, Portugal? For in everything that happened to me on that very day, I felt that extraordinary motherly protection and care, which turned out to be stronger than the deadly bullet.“

This painting says it all (a print hangs in our home): 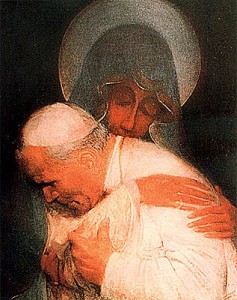 Someday I Want to be a Knight

Yesterday before a funeral I observed a little boy, probably no more than 4 years old interacting with the 4th degree honor guard. He saw them from a distance and waved big. When the Knights waved back, he ran to them as if they were the embodiment of his favorite cartoon characters. He stood in awe of them dressed in full regalia...all smiles. One Knight asked, "Do you want to be a Knight of Columbus one day?" Without hesitation the boy nodded vigorously.

I can't remember feeling that way as a child. I admit to thinking that their swords were pretty cool, but I didn't want to be a Knight. My dad was a Knight, though not very active. I knew many good men who were Knights. These men made pancakes and gave out tootsie rolls. That was the extent of my knowledge of the Knights of Columbus during childhood and adolescence.

When I was 18, my stepmother asked me if I wanted to be a Knight. I said no.

And later, as a young, single man I still had no inclination to become a Knight. Not that I was against them, I just didn't want to be one. I had no idea what it was to be a Knight.

While in seminary, the Knights of Columbus sent financial gifts to me and I was aware of their prayers and encouragement. I was grateful, but I still had no desire to become a Knight. After I was ordained to the priesthood, Knights from our local council kept asking me to join. I reluctantly said yes, thinking that I could just blend into the group without really being active. During this time, I encountered many good men; men who wanted to help people, men who wanted to make a difference in the lives of others; men who share common goals and common beliefs...men who make pancakes and give out tootsie rolls.

It was not until I was assigned to be associate state chaplain and Father Prior for the Kansas Knights of Columbus that I really wanted to be a Knight. What changed? I think I saw and experienced a bigger picture of who the Knights of Columbus are. In a society that is often hostile to men and fearful of healthy masculinity, I found in the Knights strong, good men. In a society that often tells men that they are not needed or wanted, I found men who are needed, appreciated and have a profound effect on the lives of others. These men love their God; they love their Church; they love their wives and children. They love their country. I saw this and I became like that little boy at the funeral yesterday. I am attracted to all that the Knights of Columbus embody. It was always there for me, it just took me a while to want it. (I'm not the sharpest crayon in the box.)

It is my hope to encourage our Knights toward growth in their personal relationship with God through daily, personal prayer. I hope to encourage those with broken or weak relationships with their wives and children to forgiveness and healing. I hope to help those who struggle with aspects of the faith to embrace all that is true, good and beautiful...the fullness of our faith. I hope to be a part of men helping men to truly be good men. I want to be a Knight of Columbus. How about you?

On Christmas Eve in 1492, the Santa Maria came aground on a reef off the coast of the island Columbus named La Española; or as we know it - Hispaniola. That left 39 men too many to board the La Niña for the voyage back to Spain. Thus was the founding of the first Spanish outpost in the new world on Christmas Day, 1492 – Villa de la Navidad; the town of Christmas.

That's what Christmas is all about, Charlie Brown...

Of all the Christmas television "specials" over fifty years, perhaps the all-time greatest is A Charlie Brown Christmas. With its cool jazz music, real kids' voices, no laugh track, wry humor, and a timeless message, it was ahead of its time attacking the secularism and commercialism of the "holiday season". The best part of the show had no music at all (Luke 2: 8-14) and almost did not make it to the screen; Charles Schultz said "If we don't do it, who will?" Christmas is a Federal holiday – listen to Linus as he reminds us of "the reason for the season":

Read more: That's what Christmas is all about, Charlie Brown...