With My Hand Over My Heart 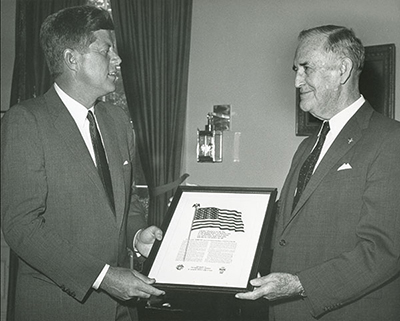 July is a time filled with expressions of patriotism -- flags flying, parades, Sousa marches, firework displays accompanied by martial music, and recitations of the Pledge of Allegiance. How often have we placed our hands over our hearts, faced the nation's flag, and recited this brief statement of fealty? Do we understand, however, what we are saying, or has the recital become a ritual, a mere collection of words, a formality before certain public events?

The Pledge is an outward declaration of fidelity to a nation uniquely conceived and to the values and beliefs for which it stands. Consider the significance of what is being expressed in the brief 31 words.

I pledge allegiance – This says that it is a personal and individual promise of loyalty. It is a continuation of the oath made by the signers of the Declaration of Independence who pledged their lives, their fortunes, and their sacred honor to create this nation. It is a commitment to the patrimony that has been handed down from generations past and a vow to maintain the nation’s precepts for generations to come.

to the flag – The banner is not a mere piece of colorful bunting, but a symbol of the nation, a memorial to the sacrifices that were made to create, maintain, protect and develop this country. It is a reminder of the nation’s history, traditions, culture, the principles upon which it was founded, and the values which it espouses.

of the United States of America – It does not refer to any country, but only this country, which is an embodiment of fifty states and tens of thousands of communities, each with its individual character. It is a country composed of people with heritages from every corner of the earth.

and to the Republic for which it stands -- This nation formed a government, as President Lincoln so eloquently stated, “of the people, by the people, for the people.” The power of governance resides in the people who elect individuals to exercise authority according to the rule of law on their behalf.

one nation – The country is not a confederation of sovereign entities, but a united set of states. It is a single nation with a Constitution which enumerates a division of powers between the national government and the states and localities.

under God – America was established by people of faith, founded on a belief that everyone is created equal, that they possess certain unalienable rights provided to them by their Creator. As a gift of God, the rights to life, liberty and the pursuit of happiness cannot be justly abrogated or abridged by any state, government, dictator, or will of the majority. The primary purpose of government is to provide the assurance that people can exercise those pre-existing rights; it does not create, grant or dispense them. The government exists for the people, not people for the government. This endowment of unalienable rights by a transcendent being is the essence of the American premise.

indivisible – The union of states was forged as a single country with the blood and sacrifices of some three million men who fought a Civil War among themselves, from which emerged a “resolve that these dead shall not have died in vain, that this nation…. shall not perish from the earth.”

This brief vow and solemn remembrance of what the United States stands for should be internalized, said regularly, and adhered to by all who cherish this nation.

The great danger to America today is a loss of religious faith, a lack of recognition that this is a nation under God. If the substance of being an American is rooted in the transcendental, then a loss of belief in God leads to a loss of belief that the rights bestowed by Him are intrinsic and unalienable. If these rights are to be retained, then a belief in God must be maintained.

The early Americans were very aware of the importance of faith among the people. They were convinced that without a societal belief in God the nation’s founding principles would be at risk. John Adams stated, "Our Constitution was made only for a moral and religious people. It is wholly inadequate to the government of any other." George Washington, in his Farewell Address to the Nation, cautioned that "reason and experience both forbid us to expect that national morality can prevail in exclusion of religious principle." Patrick Henry warned, "It is when a people forget God that tyrants forge their chains."

From the time of the Pilgrims onward, colonial governors, legislatures, Revolutionary leaders, presidents and the Congress have issued hundreds of proclamations acknowledging the existence of God and calling for public fasting and prayer to seek His grace and thank Him for His beneficence. In time of war, in the Christmas season, and in their traditional Thanksgiving Day proclamations, most presidents have made reference to the Almighty. Congress, even today, opens its daily sessions with a prayer.

For decades, however, vocal minorities, operating through the courts, have been driving God from virtually all public recognition. Although the vast majority of the people in America currently state that they believe in God, a large and growing number no longer affiliate with any organized religion. Further, almost half of adults under 30 years of age do not feel certain that there is a God. Our society today is more anti-religious in its policies and regulations, its views and attitudes, its behavior and temperament than it has ever been.

Catholics, indeed all Christians, can play a catalytic role in combatting the secularization of this nation and in restoring and preserving its founding values. Let us demonstrate the complementarity of religion and patriotism.

As Americans, let us commit ourselves to support the Constitution, promote laws that are just and respect the dignity of every person, mold public opinion on issues that affect our religious precepts, and promote virtue and morality that must underlie a nation of, for and by the people. As Catholics, let us practice patriotism and citizenship consistent with Catholic virtues and Church teachings. It is when we live our religious beliefs conscientiously and faithfully and advance them in the public square that we make our most beneficial contributions to the nation.

May America remain one nation under God with liberty and justice for all.
* * * * *